I believe it’s past the point of no return. At least in my head. When it hits the planning stage, it’s too far gone.

We once had a bunch of young pullets, soon to be layers. They were in a chicken wire pen on a dirt floor INSIDE a barn. Each morning I’d go out and find one or two gory dead birds, and it was definitely concerning. I ended ups catching the vandals with a live trap; three baby possums. Mama was using our barn for their chicken Croissandwich-making .

Babis are fine. I like babies. But this little batch of miscreants had decimated our flock. No bloody details, there’s no need, but they were sent shortly to possum Hell, where I hope they never stopped seeing those two fascinating lights coming down the road again and again.

Point being, I wasn’t thorough, and the baby possums and chickens paid the ultimate price for my laziness and sloppiness.  So I want to think this through with the focus that comes with age.  Wait, that’s not a thing.

Anyway the plans are in the pipeline.  I Photoshopped an internet image into a line drawing that’s close to what I hope to build as a pen, and more importantly, after a lot of idea-shuffling I think that the outhouse itself might be able to do the job as a chicken coop.

The problem with the outhouse (really the only problem, but a big one) is the concrete seat that dissects the place, almost cutting it in half.  I think I can work with it though.  I’m geeked. 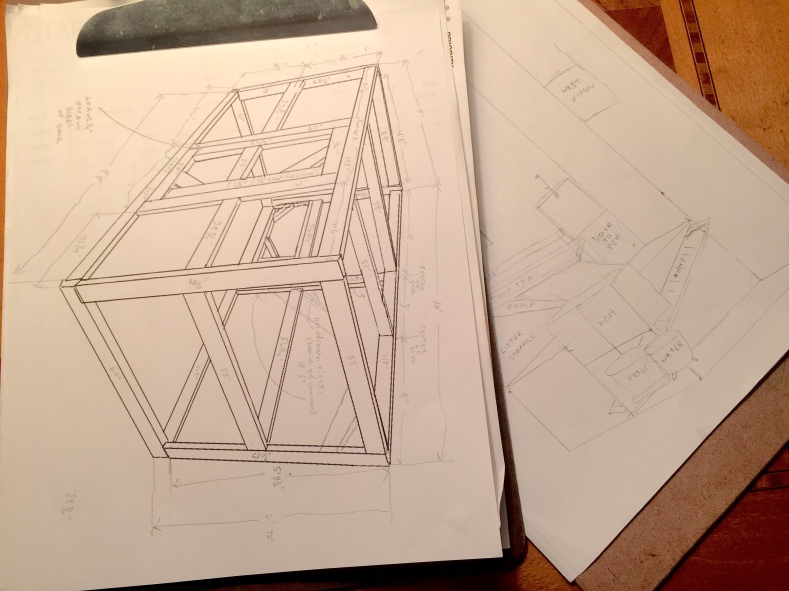 16 thoughts on “coop and pen plans”