After yesterday’s waaahh-fest about pitiful me and the downy mildew slaughter of cucumbers, it seems like a brighter story is in order.

Most gardens turn out to be mixtures of failure, partial successes, and whoopee.

For me the whoopee this year comes from the tomatoes. It’s been work, but so far so good. 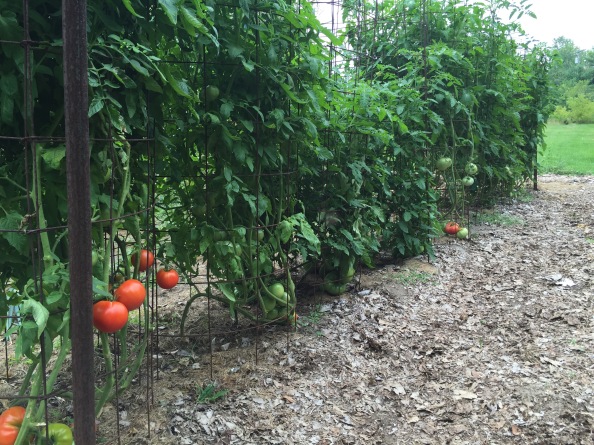 The two shorter plants in the center of the picture aren’t actually that short. They’re my favorites: the Cherokee Purples. Before I had noticed what was happening, the plants had sagged a little more each day in their cages due to the weight of the tomatoes and the fact that I’d trimmed away most of their lower vine support.

I could try to pull them back up, but I’ve done that in the past, and only ended up injuring the vines. They’re doing fine as is.

It’s never wise to assert absolutes in gardening, so I’ll just say that this year, in this garden, I believe that religiously trimming off branches with leaves that show discoloration has worked fabulously to keep diseases in check.

And the second planting of sweet corn is in…

Which means time for the freezer…

And visions of happy people around the Thanksgiving table.

6 thoughts on “now the good news”